When you talk to a group of anglers, many will have different opinions about what gear ratio is best for fishing. It’s important to know what type of fish you’re going for and get the correct reels that suit your needs.

A “6-to-1” low speed reel is best for light line and will give you an advantage when fishing for panfish or trout. These reels are usually very lightweight as well as economical.

“8-to-1” medium speed reels allow enough speed to move larger fish but still allows a good sensitivity and feel for the line and maneuverability of the lure used. This is a common gear ration, and can range from a little more than 8:1 to 10:1.

“10-to-1” high speed reels give you maximum line retrieval rate and incredible lure control during the fight. This ratio will also decrease the amount of backlash in your reel because it has an increased braking power which is essential when fighting large fish.

A baitcasting reel is best when fishing with heavier line and big lures, which might lead you to believe that a high ratio would be best, but this isn’t necessarily the case. The gear ratios on baitcasting reels are different from spinning reels because they have more parts, which increases the weight of them. This means that a high gear ratio isn’t necessary, because it will decrease your speed and increase the backlash rate in your reel.

“6-to-1” low speed reels are ideal for heavy line and big lures. They have a good line retrieval rate while fighting large fish, and also give you control over the lure used.

“7-to-1” medium speed reels are a good combination of fast line retrieval rate, which is important for heavy line and big lures, but still gives you enough power to work with any situation that may arise during your next fishing trip. This ratio will increase the weight of your reel because it uses more parts to achieve this combination of speed and power.

“8-to-1” medium speed reels are also good for fishing with heavier line and large lures, but what they lack in power compared to low speed ratios, they make up for with their increased speed over high gear ratios. They are very popular among bass anglers.

Just like baitcasting reels, conventional reels have more parts than spinning reels do, which means that it will be heavier and therefore will not need as high of a gear ratio.

“5-to-1” is the ideal low speed ratio for tackling large fish with heavy line. This gives the angler enough sensitivity and strength for heavy line and big lures. This is a very popular reel among bass anglers as well as those fishing for sharks, barracuda, and other strong saltwater fish.

“6-to-1” low speed reels are also ideal when fishing with heavier line, because it gives you better casting distance, and it’s easier to catch the fish when they make a run for it.

“7-to-1” medium speed reels are good for when you need to give your line a quick stretch when fishing with heavy line and large lures. You will be able to feel every little tug at the end of the line while keeping in contact with the fish’s mouth. This will allow you to feel when they are about to make a move so you can set the hook at just the right time.

“8-to-1” medium speed reels will give your line a quick stretch when fishing with larger lures, but it doesn’t have enough power for large saltwater fish, and it’s a little too heavy for trophy trout or panfish.

“9-to-1” high speed reels give you the maximum amount of power, which is necessary when fishing with large lures and strong saltwater fish. This will increase the weight of your reel though, making it harder to cast.

“5-to-1” low speed reels are good for working big baits like swimbaits, but it’s also the ideal gear ratio for bass fishing because it has just enough power to work with any situation that arises during your trip.

“6-to-1” low speed reels are good for fishing with heavy line and large lures, but it lacks the power to work with big fish like largemouth bass. It’s still great for trophy trout though.

“7-to-1” medium speed reels are good for when you need to give your line a quick stretch when fishing with big lures, but it’s still strong enough for large bass.

“8-to-1” medium speed reels are also good for fishing with heavy line and large baits like swimbaits, but you will lose some sensitivity to the feel of your lure because of its weight.

Trout anglers need a mix of sensitivity and power. If you fish with lighter line, medium speed reels are the best choice because they give you better feel and control over your lure than low or high speed ratios. These reels give off less noise as well which is great for those stealthy trout strikes.

“5-to-1” low speed lures are great for when you need to give your line a quick stretch, and they’re still sensitive enough for trout.

“6-to-1” low speed reels will give you the same features as 5:1, but it lacks the power to work with big fish.

“7-to-1” medium speed reels are great for trout fishing with lighter line because it has better feel and control over your lure, but it lacks the power to fight big fish.

Redfish anglers need a reliable reel that will give them the strength to handle strong strikes from large reds, and give them enough sensitivity to feel every little bite.

“5-to-1” reels give you a good blend of power and sensitivity, which is perfect for working big baits from both the top and bottom of the water column. They’re still lightweight enough to have great casting distance as well.

Crappie anglers need better feel than power. High speed reels with a 6:1 gear ratio is perfect for crappie fishing because the lighter weight doesn’t decrease casting distance, and it’s light enough to give you great feel when jigging or fishing with minnows.

“6-to-1” low speed reels will give you better feel than 5:1, but it’s still the minimum power you should fish with for crappie.

Walleye anglers need a little bit of everything because they fish in all different environments and situations. For those that like to work their lures slowly and patiently, medium speed reels with a 7:1 gear ratio are perfect.

“7-to-1” low speed reels are where it’s at when fishing deep for walleye, because the power you get from these ratios will allow you to fish with heavy line and large lures.

If you’re using spinnerbaits, a high speed reel with a 9:1 gear ratio is your best choice. You need the power to work large lures, and for those tough strikes that can rip your lure away from you.

High speed reels with an 8:1 gear ratio are perfect for crankbait fishing because it gives you just enough power to work large lures and has the casting distance for long retrieves.

High speed reels with a 9:1 gear ratio is perfect for fishing topwaters because of its power and casting distance.

It’s important to know the best gear ratio for fishing reels, but it really depends on your needs. If you spend most of your time in freshwater and use spinning tackle exclusively (meaning you don’t do much bait casting), then a 3-7 is probably what you need. For saltwater situations where using both baitcasting and spinners are required or if you want more power for fighting fish, consider something like 8-11. The choice between these two options will come down to personal preference as well as which style of reel suits your fishing situation better. 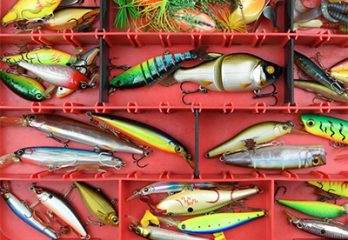 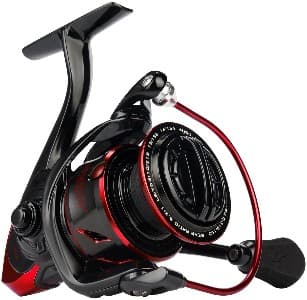